Van Halen-"5150 Tour"-1985-11" X 12"-24 pages-Color Concert and souvenir our program.Second to only Jimi Hendrix, Eddie Van Halen was undoubtedly one of the most influential, original, and talented rock guitarists of the 20th century. Born Edward Lodewijk Van Halen on January 26, 1955, in the Netherlands, Van Halen moved with his family to the U.S. in the '60s. He and his older brother, Alex, began taking piano lessons at an early age, which planted the seeds for both of the siblings' future musical career. Mesmerized by the British Invasion rock movement (especially the Dave Clark Five), Eddie began playing the drums, while Alex took up guitar. The brothers switched their respective instruments shortly thereafter (while Eddie was out working a paper route trying to make his drum kit's payments, Alex was bashing away at his drums, until he was actually better than Eddie) -- as such, hard rock guitarists as Eric Clapton and Jimmy Page soon influenced the youngest Van Halen's playing. The concert program has been autographed on the front cover by Eddie Van Halen..............BOTH CONCERT PROGRAM AND AUTOGRAPH ARE IN VERY GOOD CONDITION. 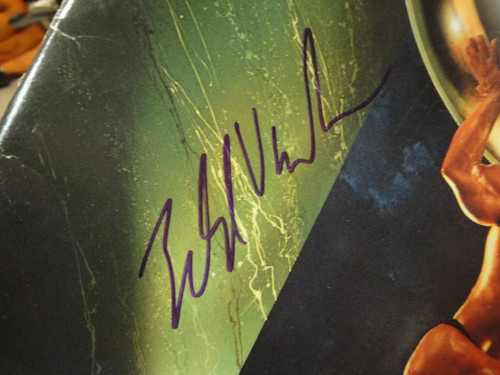