THIS IS AN AUTHENTICALLY AUTOGRAPHED PHOTO BY DICK VAN DYKE.. THIS IS A 7 INCH BY 9 INCH BLACK AND WHITE PHOTO SIGNED BY DICK VAN DYKE. HAS AN ATTACHED ORIGINAL DATED BYLINE ON OFFICIAL ABC STATIONARY EXPLANING THE PHOTO AND GIVING DATE OF BROADCAST. RELEASED IN 1973. FROM 'THE LAND'. CONDITION OF THE PHOTO AND AUTOGRAPH IS VERY GOOD. Richard Wayne Dick Van Dyke (born December 13, 1925) is an American actor, presenter and entertainer, with a career spanning six decades.[1] He is best known for his starring roles in Mary Poppins, Chitty Chitty Bang Bang, The Dick Van Dyke Show and Diagnosis: Murder.[1] 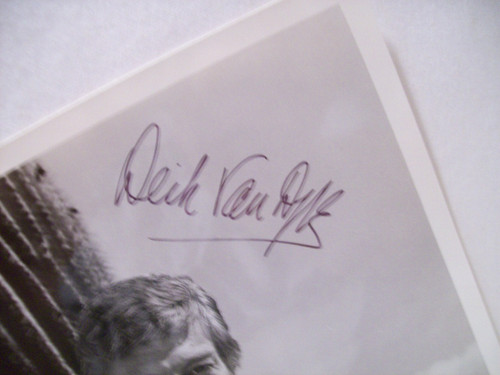