This item is an 8" X 10",black and white mounted photo of actor Lee Van Cleef in a scene from the 1966 Movie-"The Good The Bad And The Ugly".Lee Van Cleef's hawk nose and squinty, sinister leer made him a beloved villain in movie westerns of the 1950s and 1960s. Van Cleef played henchmen and heavies in dozens of films, including High Noon (1952, getting plugged in the end by Gary Cooper), The Quiet Gun (1957), and The Man Who Shot Liberty Valance (1962, getting slugged in the end by John Wayne). Italian director Sergio Leone cast him opposite Clint Eastwood in the early "spaghetti western" For a Few Dollars More (1965) and then as Angel Eyes, the greedy gunslinger who was the "bad" in The Good, the Bad, and the Ugly (1966). The roles made his career: Van Cleef spent the next decade in Italy and Spain, starring in westerns and action flicks like Il Grande Duello (1972) and Diamante Lobo (1976). (His 1989 obituary in the British newspaper The Independent noted, "Europe not only kept him steadily employed, but in the postcard shops he was a cult in the order of James Dean.") He had a brief American renaissance in 1981, playing a scowling police commissioner in the futuristic thriller Escape From New York. He also played an aging Anglo ninja in the short-lived 1984 TV series The Master.A hand signed cut signature by Lee Van Cleef has been affixed to the front. The cut signature portion is approximately 1 1/2" X 4"..................BOTH PHOTO AND AUTOGRAPH ARE IN VERY GOOD CONDITION. 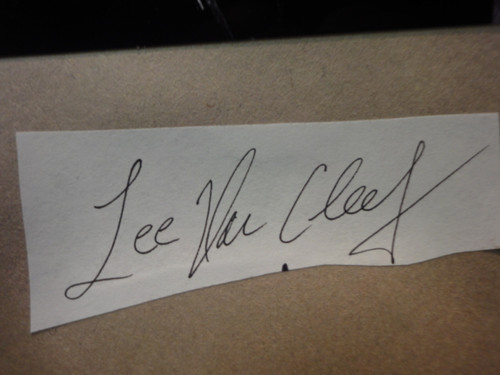