This item is a 3" X 6", color photo of actors Dick Van Dyke and Hope Lange as they starred in the 1970's television series-"The New Dick Van Dyke Show".The New Dick Van Dyke Show is an American sitcom starring Dick Van Dyke that aired on CBS from 1971 to 1974. It was Van Dyke's first return to series television since The Dick Van Dyke Show. CBS was so eager to have Dick Van Dyke return to their network that they signed him to a three-year contract. Van Dyke was living in Cave Creek, Arizona, at the time and did not want to move back to Hollywood, so the network agreed to film the show at Southwestern Studio on Stage 1 in nearby Carefree, Arizona. Dick Van Dyke Show creator Carl Reiner wrote and directed numerous episodes, also serving as creative consultant................Richard Wayne Van Dyke (born December 13, 1925) is an American actor, comedian, writer, singer, and dancer, whose award-winning career has spanned seven decades in film, television and the theatre.....Hope Elise Ross Lange (November 28, 1933 – December 19, 2003) was an American film, stage, and television actress.Lange was nominated for the Best Supporting Actress Golden Globe and the Academy Award for Best Supporting Actress for her portrayal of Selena Cross in the 1957 film Peyton Place. In 1969 and 1970, she won the Primetime Emmy Award for Outstanding Lead Actress in a Comedy Series for her role as Carolyn Muir in the sitcom The Ghost & Mrs. Muir. The photo has been autographed on the back By Dick Van Dyke and Hope Lange............BOTH PHOTO AND AUTOGRAPHS ARE IN VERY GOOD CONDITION. 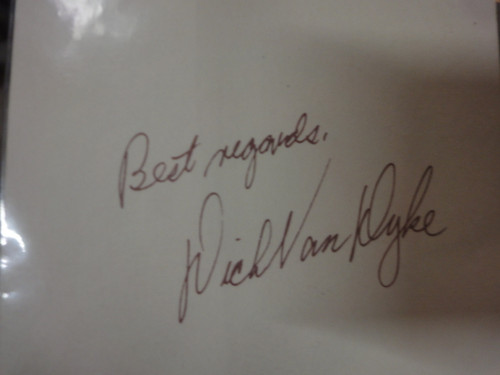