This item is an 8" X 10", black and white photo of Josephy Valachi from 1963 as he testifies before the Senate Investigations Subcommittee. This photo was originally published  in The Philadelphia Evening Bulletin Newspaper in October 1963 and features an original byline which gives more info on the photo. The back of the photo has a stamp from The Evening Bulletin Reference Library and original editor's markings. Joseph Michael Valachi (September 22, 1904 – April 3, 1971) was an American gangster in the Genovese crime family who is notable as the first member of the Italian-American Mafia to, in 1963, acknowledge its existence publicly. He is credited with the popularization of the term cosa nostra. Valachi was convicted of drug trafficking in 1959, and sentenced to 15 years' imprisonment. In 1962 while he and Genovese family boss Vito Genovese were in prison together, he murdered an inmate he thought was a hitman sent by Genovese, and was sentenced to life imprisonment. Valachi subsequently became a government witness, and the next year testified before a U.S. Senate committee in what became known as the Valachi hearings. He disclosed previously unknown information about the Italian-American Mafia, including its structure, operations, rituals, and membership. His testimony was the first major violation of omertà, the mafia's code of silence, and the first concrete evidence that the Italian-American Mafia existed to federal authorities and the general public. Valachi died in prison on April 3, 1971. The photo has been autographed on the front by Joseph Valachi..........................BOTH PHOTO AND AUTOGRAPH ARE IN VERY GOOD CONDITION. 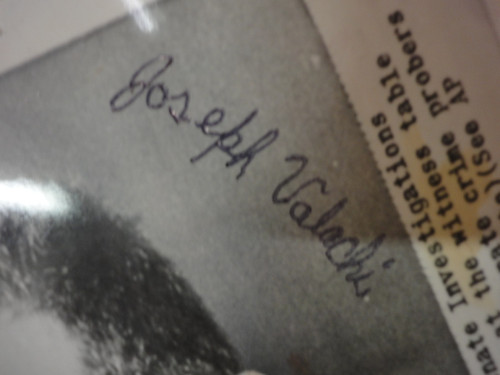