Ustinov, Peter Photo Signed Autograph One Of Our Dinosaurs Is Missing Disney 1975

THIS IS AN AUTHENTICALLY AUTOGRAPHED PHOTO BY PETER USTINOV.. THIS IS A 8 INCH BY 10 INCH COLOR LITHOGRAPH SIGNED BY PETER USTINOV. CONDITION OF THE PHOTO AND AUTOGRAPH IS VERY GOOD. One of Our Dinosaurs is Missing is a 1975 British comedy film, which is set in the early 1920s, about the theft of a dinosaur skeleton from the Natural History Museum. The film was produced by Disney. The title is a parody of the film title One of Our Aircraft is Missing. The film was based on the 1970 novel The Great Dinosaur Robbery by David Forrest (pseudonym of David Eliades and Robert Forrest Webb). 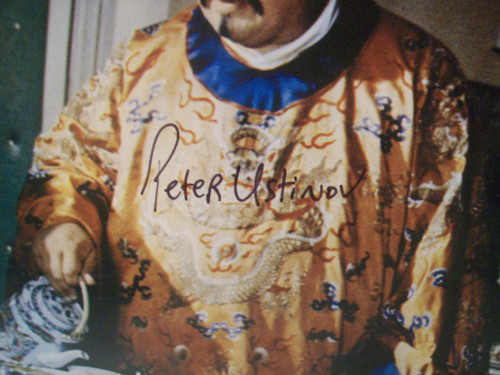 Ustinov, Peter Photo Signed Autograph One Of Our Dinosaurs Is Missing Disney 1975