This item is a 10 1/2" X 12 1/2",black and white lithograph photo of actor Peter Ustinov. The photo has been mounted on a 10 1/2" X 12 1/2" piece of photography paper.Sir Peter Alexander Ustinov, CBE ( 16 April 1921  28 March 2004), born Peter Alexander Baron von Ustinov, was an Academy Award-winning English actor, writer, dramatist and raconteur of French, Italian, Swiss, Russian and Ethiopian ancestry.His career as a dramatist continued alongside his acting career, his best-known play being Romanoff and Juliet (1956). His film roles include Roman emperor Nero in Quo Vadis? (1951), Captain Vere in Billy Budd (1962), Lentulus Batiatus in Spartacus (1960), an old man surviving a totalitarian future in Logan's Run (1976), and, in a half dozen films, Hercule Poirot, a part he first played in Death on the Nile (1978). Ustinov voiced the well-known anthropomorphic lion Prince John of the 1973 Disney animated movie Robin Hood. He also worked on several films as writer and occasionally director, including The Way Ahead (1944), School for Secrets (1946), Hot Millions (1968) and Memed, My Hawk (1984). He won Oscars for Best Supporting Actor for his roles in Spartacus (1960) and Topkapi (1964). He also won one Golden Globe award for Best Supporting Actor for the film Quo Vadis? (he set the Oscar and Globe statuettes up on his desk as if playing doubles tennis; the game was also a love of his life, as was ocean yachting). Furthermore, Ustinov was the winner of three Emmys, one Grammy, and was nominated for two Tony awards.The lithograph photo has been autographed on the front by Peter Ustinov with a fountain pen in gray.....BOTH PHOTO AND AUTOGRAPH ARE IN EXCELLENT CONDITION................ 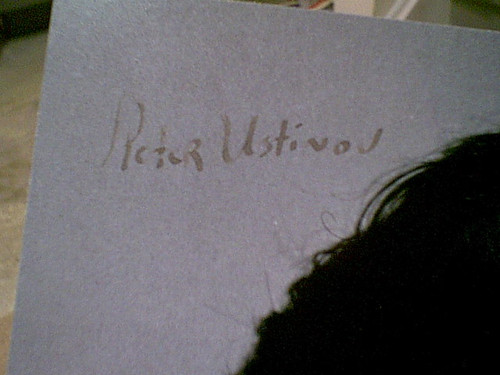