Leon Uris-"The Haj"-1984-Doubleday-5" X 8"-565 pages-Hardcover Book-With Jacket-First Edition- Signed By Author. Leon Uris was a best-selling novelist known especially for modern Jewish heroes such as those depicted in his 1958 novel Exodus. An international success, the book resulted from Uris's research as a war correspondent during the early days of the founding of Israel. Uris was a high school dropout who joined the U.S. Marines during World War II, serving in the South Pacific from 1942 to 1945. He started his writing career selling short stories, and published his first novel in 1953: Battle Cry, a tale based on his experiences in the Marines. During the 1950s and '60s he wrote novels and worked on screenplays for Hollywood, either adaptations of his books (Battle Cry, The Angry Hills, Exodus and Topaz) or original stories (1957's Gunfight at the O.K. Corral). A popular author for many years, he wrote novels based on historical research, his own travels and interviews. His best-known works include Mila 18 (1961), Q.B. VII (1970), Trinity (1976, about Ireland, not Israel) and A God in Ruins (1999). The book has been autographed on the title page by Leon Uris...................BOTH BOOK AND AUTOGRAPH ARE IN VERY GOOD CONDITION. 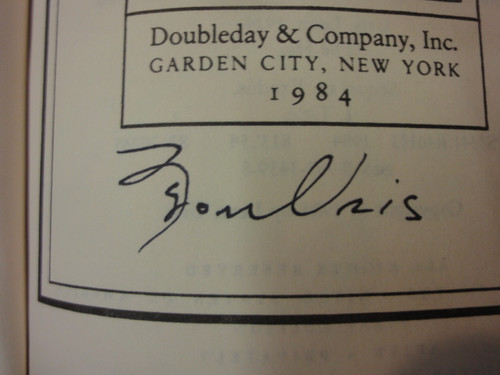