"Message From The President Of The United States-A Report Of The Postmasters Appointed Between April 1841 and March 1842"-27th Congress-Doc. No. 228-May 18, 1842-5 1/2" X 9"-67 pages-Official Congressional Document-Signed By President John Tyler.John Tyler was the 10th president of the United States. The child of an old Virginia family, he graduated from the College of William and Mary at age 17 (not an unusual age for that time) and went on to become a member of the U.S. House of Representatives (1816-21), governor of Virginia (1825-26), and a member of the U.S. Senate (1827-36). He was tapped by the Whigs to be the running mate of William Henry Harrison in 1840 -- not so much for his policies, but to draw support from Virginia and the south. Just one month into his term, Harrison died and Tyler became president. Tyler's years in office were rocky, and by the end of his term, neither the Whigs nor the Democrats supported him. He chose not to run for re-election. He was succeeded by Democrat James K. Polk. At the time of his death in 1862, Tyler was a member of the Confederate Congress, in revolt against the United States during the Civil War.The document has been autographed on the front cover by John Tyler with a fountain pen in blue..........BOTH DOCUMENT AND AUTOGRAPH ARE IN VERY GOOD CONDITION. 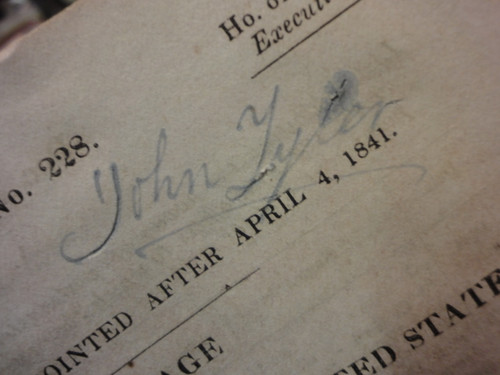