TOMMY TUNE TWIGGY LP SIGNED AUTOGRAPH MY ONE AND ONLY 1983

Tune, Tommy Twiggy LP Signed Autograph My One And Only 1983

SKU:
tutotwlpsiau
Headline:
TOMMY TUNE TWIGGY LP SIGNED AUTOGRAPH MY ONE AND ONLY 1983

THIS IS AN AUTHENTICALLY AUTOGRAPHED LP BY TOMMY TUNE AND TWIGGY.. TWIGGY AND TOMMY TUNE-MY ONE AND ONLY-THE NEW GERSHWIM MUSICAL-(ATLANTIC 80110)PHOTO COVER IS SIGNED BY TOMMY TUNE AND TWIGGY. CONDITION OF THE VINYL,COVER, AND AUTOGRAPHS IS MINT MINUS. My One and Only is a musical with a book by Peter Stone and Timothy S. Mayer and music and lyrics by George and Ira Gershwin. Written to incorporate classic Gershwin tunes from Funny Face and other popular shows into one evening of entertainment, the plot, set in 1927 America, revolves around Capt. Billy Buck Chandler, a barnstorming aviator, and Edith Herbert, an ex-English Channel swimmer and the star of Prince Nicolai Erraclyovitch Tchatchavadze's International Aquacade. Billy's plan to be the first man to fly solo across the Atlantic Ocean is sidetracked by his determination to win Edith's hand, and he takes a crash course in sophistication at Mr. Magix' Tonsorial and Sartorial Emporial to help him achieve his goal. What follows is a series of escapades and misadventures that seems destined to keep the potential lovers apart forever. After 37 previews, the Broadway production, directed and choreographed by Tommy Tune and Thommie Walsh, opened on May 1, 1983 at the St. James Theatre, where it ran for 767 performances. The opening night cast included Tune, Twiggy, Roscoe Lee Browne, Denny Dillon, and Charles "Honi" Coles. Notable replacements during the run inclded Sandy Duncan, Don Correia, Jeff Calhoun, and Georgia Engel. The show opened in the UK at the Chichester Festival Theatre and then opened in the West End at the Piccadilly Theatre in February 2002, starring Janie Dee and Tim Flavin with direction by Loveday Ingram and choreography by Craig Revel Horwood. Cabaret singer and Gershwin historian Michael Feinstein served as the musical consultant for the project. Lucie Arnaz starred in the national tour opposite Tommy Tune. 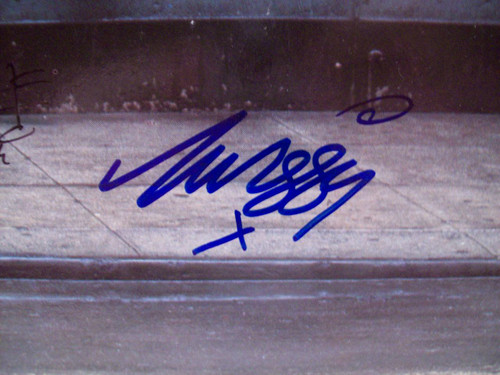 Tune, Tommy Twiggy LP Signed Autograph My One And Only 1983