This item is a 9 1/2" X 13",black and white lithograph photo of Ted Turner. The lithograph has been mounted on a 9 1/2" X 13" piece of photography paper.Turner, Ted (Robert Edward Turner 3d), 1938, American television network executive, b. Cincinnati. After inheriting his father's billboard company, he founded (1976) a television station, WTBS, and built it into the Turner Broadcasting System (TBS). He pioneered superstation broadcasting, in which a TV station provides programming via satellite to cable systems nationwide. In 1980 he established the Cable News Network (CNN), television's first 24-hour news channel, which was first met with skepticism and is now a broadcasting fixture; in 1988 he added TNT, a movie channel, and in 1992, the Cartoon Network. After his failed attempt to purchase the CBS network, Turner bought the MGM/UA Entertainment Company, gaining a vast library of film classics. TBS also offered sports programming after acquiring the Atlanta Braves baseball team (1976) and a holding in the Atlanta Hawks basketball team (1977). In 1996, TBS merged with Time Warner Inc. (now AOL Time Warner). Turner became vice chairman of Time Warner in charge of the TBS subsidiary, a position he held until he became a vice chairman (20002003) of AOL Time Warner. In 1997, Turner announced he would give $1 billion to United Nations programs; he also has underwritten a number of other programs devoted to international understanding and peace and the environment. A competitive sailor and sports enthusiast, he won the America's Cup yachting race in 1977. He was married to Jane Fonda in 1991; they separated in 2000.The photo has been autographed on the front by Ted Turner...............BOTH PHOTO AND AUTOGRAPH ARE IN VERY GOOD CONDITION.................... 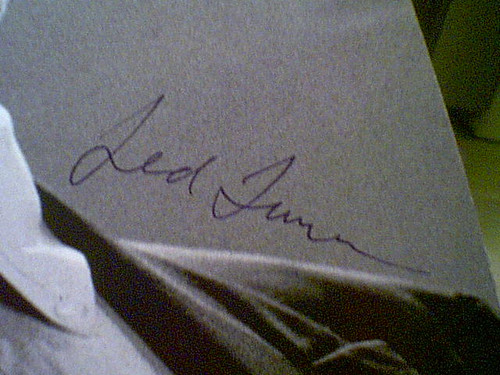