Lana Turner-"The Lady The Legend The Truth"-1982-Dutton-6" X 9 1/2"-311 pages-hardcover book-with jacket-with photos-Signed By Author.Known as the "Sweater Girl," Lana Turner (like Betty Grable) was a popular pinup for GIs in World War II. After the war she became a genuine movie star, helped by her contract with powerful MGM Studios. Her best-known movies included The Postman Always Rings Twice (1946) and Peyton Place (1957). She became one of Hollywood's favorite legends for allegedly being "discovered" at Schwab's Drugstore on Sunset Boulevard. (Her official site claims the actual location was the Top Hat Cafe, across the street from Hollywood High.) Her notoriety was assured in 1958 when her lover, mobster Johnny Stompanato, was stabbed to death with a kitchen knife by her daughter Cheryl Crane. (The killing was later ruled justifiable homicide.) Turner was married to seven men, including bandleader Artie Shaw. In the 1980s she had a recurring role on the TV series Falcon Crest. Her autobiography, Lana: The Lady, the Legend, the Truth, was published in 1982. The book has been autographed on the title page by Lana Turner...........BOTH BOOK AND AUTOGRAPH ARE IN VERY GOOD CONDITION................. 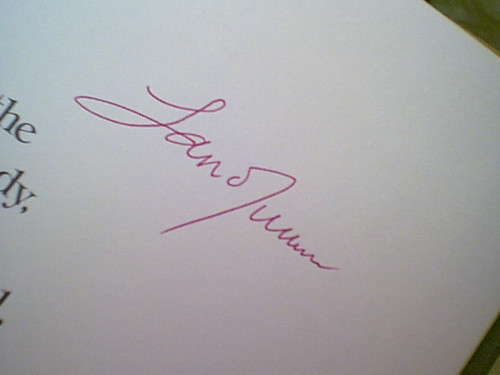