"Screenland" Magazine-April 1951-74 pages. This vintage Screenland Magazine-which originally sold for fifteen cents-features a color cover photo of actress Lana Turner.Lana Turner (February 8, 1921  June 29, 1995) was an American actress.Discovered and signed to a film contract by MGM at the age of sixteen, Turner first attracted attention in They Won't Forget (1937). She played featured roles, often as the ingenue, in such films as Love Finds Andy Hardy (1938). During the early 1940s she established herself as a leading actress in such films as Johnny Eager (1941), Ziegfeld Girl (1941) and Somewhere I'll Find You (1942), and her reputation as a glamorous femme fatale was enhanced by her performance in the film noir The Postman Always Rings Twice (1946). Her popularity continued through the 1950s, in such films as The Bad and the Beautiful (1952) and Peyton Place (1957), for which she was nominated for an Academy Award for Best Actress. The magazine has been autographed on the front cover by Lana Turner with a fountain pen in brown.............BOTH MAGAZINE AND AUTOGRAPH ARE IN VERY GOOD CONDITION......... 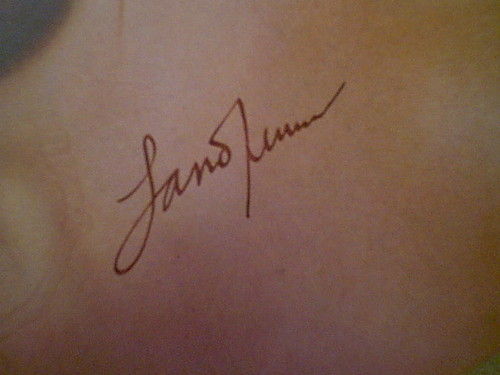