Life Magazine-January 29,1940-80 pages/ This vintage Life Magazine-which originally sold for ten cents-features a full cover photo of "starlet" Lana Turner. The magazine also features a three page article with photos on Lana Turner-"Starlets are World's most envied of girls".Lana Turner (February 8, 1921  June 29, 1995) was an Academy Award-nominated American film actress. On-screen, she was well-known for the glamour and sensuality she brought to almost all her movie roles. Off-screen, she led a stormy and colorful private life which included seven husbands, numerous lovers, and a famous murder scandal.Turner's discovery at Schwab's Drug Store has become one of Hollywood's most enduring show-business legends. The true story differs only slightly from that legend. As a 16-year-old student at Hollywood High, Turner decided to skip a typing class and buy a Coke at the Top Hat Cafe located on the southeast corner of Sunset Boulevard and McCadden Place. There, she was spotted by William R. Wilkerson, publisher of the Hollywood Reporter, and his wife Tichi. Wilkerson was struck by her beauty and physique, and referred her to the actor/comedian/talent agent Zeppo Marx. Marx's agency immediately signed her on and introduced her to film director Mervyn LeRoy, who cast her in her first film, 1937's They Won't Forget. She also appeared as an extra that year in A Star Is Born. If the viewer doesn't blink, Lana can be spotted in the crowd at a boxing match.The Life Magazine has been autographed on the front cover by Lana Turner with a fountain pen in red.......BOTH MAGAZINE AND AUTOGRAPH ARE IN VERY GOOD CONDITION........... 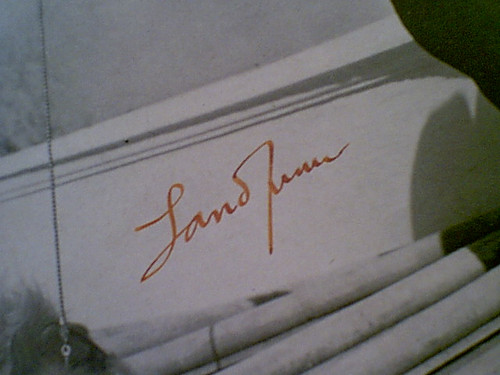