This item is a 7 1/2" X 10",black and white lithograph photo of actress Lana Turner. The lithograph photo features a biography of Lana Turner on the back which mentions her "latest" movie-the 1945-"Weekend At The Waldorf".Weekend at the Waldorf is an unabashed remake of MGM's 1932 Oscar-winner Grand Hotel: in fact, at several points in the story, the cast makes pointed references to the earlier film. The posh Waldorf Hotel in the heart of New York is the setting for several plots and subplots. Ginger Rogers plays the Garbo counterpart, a successful but severely depressed movie star who wants to be alone. Walter Pigeon steps into John Barrymore's role, sort of; whereas Barrymore was a thief posing as nobility, Pigeon is a war correspondent posing as a thief. Hotel stenographer Lana Turner (originally Joan Crawford) latches onto tycoon Edward Arnold (originally Wallace Beery) in hopes of a life of luxury. And, in the film's biggest adaptation stretch, Van Johnson is cast as a war hero who, about to undergo life-threatening surgery, wants to thoroughly enjoy what may be his last days on earth. It takes a while to figure this out, but Johnson is supposed to be the character played in Grand Hotel by Lionel Barrymore: the meek clerk who, upon discovering that he's dying, blows his life savings on one last fling. On the whole, Weekend at the Waldorf is a lot more light-hearted than Grand Hotel, as indicated by the expository character played by humorist Robert Benchley, not to mention the presence of Xavier Cugat as the Waldorf's orchestra leader. The lithograph photo has been autographed on the front by Lana Turner with a fountain pen in red.....BOTH PHOTO AND AUTOGRAPH ARE INVERY GOOD CONDITION............. 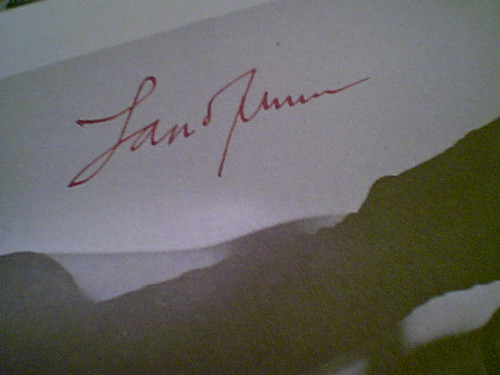