This item is a 12" X 12",color lithograph photo of Desmond Tutu.Desmond Tutu received the 1984 Nobel peace prize for his nonviolent work against apartheid, the South African government's policy of racial separateness. Raised in several communities in the Transvaal region, he was educated at a Pretoria teachers' college, a Johannesburg seminary and King's College, London. He was ordained a priest in the Anglican Church in 1961, became Bishop of Lesotho in 1976, and by 1986 was his country's highest Anglican official as Archbishop of Cape Town. In the 1970s and '80s he urged global economic pressure against South Africa and led a "defiance campaign" against a government ban on anti-apartheid demonstrations. He and other members of the clergy often intervened in confrontations between demonstrators and police or between mobs and informants. In the 1990s, with apartheid finally defeated, he headed the Truth and Reconciliation Commission in Nelson Mandela's new government. Tutu retired as archbishop in 1996 but remained outspoken in domestic and world affairs until 2010, when he announced he was "slowing down" his public activity.The lithograph photo has been autographed on the front by Desmond Tutu....................BOTH PHOTO AND AUTOGRAPH ARE IN VERY GOOD CONDITION. 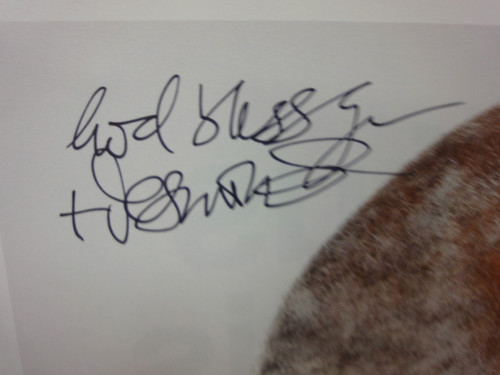