This item is a 48" X 72" original color movie theatre poster featuring the 1974 French Film-"L'Escapade JC Trambouze" starring Jean-Louis Trintignant.Jean-Louis Trintignant (born 11 December 1930) is a French actor who has enjoyed an international acclaim. He won the Best Actor award at the 1969 Cannes Film Festival.At the age of twenty, Trintignant moved to Paris to study drama, and made his theatrical debut in 1951 going on to be seen as one of the most gifted French actors of the post-war era. After touring in the early 1950s in several theater productions, his first motion picture appearance came in 1955 and the following year he gained stardom with his performance opposite Brigitte Bardot in Roger Vadim's And God Created Woman.Trintignants acting was interrupted for several years by mandatory military service. After serving in Algiers, he returned to Paris and resumed his work in film. Trintignant in Un homme et une femmeTrintignant had the leading male role in the art-house classic Un homme et une femme, which at the time was the most successful French film ever screened in the foreign market.In Italy, he was always dubbed into Italian, and his work stretched into collaborations with renowned Italian directors, including Valerio Zurlini in Summer Violent and The Desert of the Tartars, Ettore Scola in La terrazza, Bernardo Bertolucci in The Conformist, and Dino Risi in the cult film The Easy Life.Throughout the 1970s Trintignant starred in numerous films and in 1983 he made his first English language feature film, Under Fire. Following this, he starred in François Truffaut's final film, Confidentially Yours.In 1994, he starred in Krzysztof Kie?lowski's last film, Three Colors: Red.Though he takes an occasional film role, he has, as of late, been focusing essentially on his stage work.The movie theatre poster has been autographed on the front in the bottom right corner by Jean-Louis Trintignant..................BOTH POSTER AND AUTOGRAPH ARE IN VERY GOOD CONDITION........ 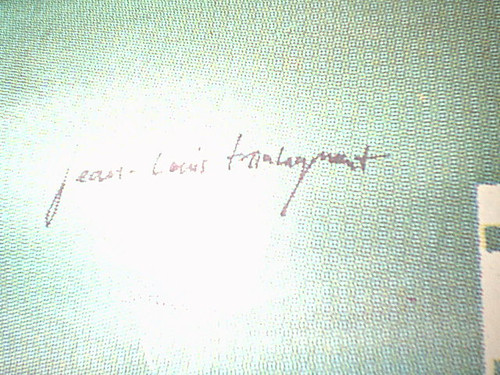