Garry Trudeau-"Doonesbury's Greatest Hits"-1978-Holt Rinehart-8 1/2" X 11"-Softcover Book-With Illustrations-Signed By Author.Garretson Beekman "Garry" Trudeau (born July 21, 1948) is an American cartoonist, best known for the Doonesbury comic strip.In 1970, Trudeau's creation of Doonesbury was syndicated by the newly formed Universal Press Syndicate. Today Doonesbury is syndicated to almost 1,400 newspapers worldwide and is accessible online in association with Slate Magazine at doonesbury.com. In 1975, he became the first comic strip artist to win a Pulitzer, traditionally awarded to editorial-page cartoonists. He was also a Pulitzer finalist in 1990. He was nominated for an Oscar in 1977 in the category of Animated Short Film, for A Doonesbury Special, in collaboration with John Hubley and Faith Hubley. A Doonesbury Special eventually won the Cannes Film Festival Jury Special Prize in 1978. Other awards include the National Cartoonist Society Newspaper Comic Strip Award in 1994, and the Reuben Award in 1995.He was made a fellow of the American Academy of Arts and Sciences in 1993. Wiley Miller, fellow comic-strip artist responsible for Non Sequitur, called Trudeau "far and away the most influential editorial cartoonist in the last 25 years."In addition to his work on Doonesbury, Trudeau has teamed with Elizabeth Swados and written plays, such as Rap Master Ronnie and Doonesbury: A Musical Comedy. In 1988, Trudeau joined forces with director Robert Altman for the HBO miniseries Tanner '88 and the Sundance Channel miniseries sequel Tanner on Tanner in 2004.In 1996, Newsweek and the Washington Post speculated that Trudeau wrote the novel Primary Colors, which was later revealed to have been written by Joe Klein.The book has been autographed on the title page by Garry Trudeau....BOTH BOOK AND AUTOGRAPH ARE IN VERY GOOD CONDITION. 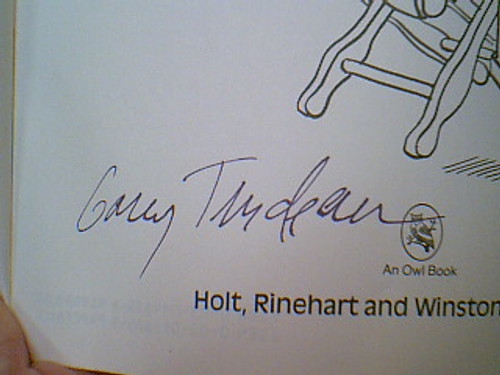