Francois Truffaut "The Films In My Life" 1975 Book Signed Autograph

Truffaut, Francois "The Films In My Life" 1975 Book Signed Autograph

Francois Truffaut-"The Films In My Life"-1975-Simon & Schuster-6" X 9"-358 pages-Hardcover Book-With Jacket- Signed By Author.Truffaut, François, 193284, French film director and critic. Known in his early 20s as a writer for the influential French film journal Cahiers du Cinéma, he was noted for his excoriating criticism of traditional French filmmaking and for his promotion of the auteur theory. The director, he believed, should have creative control over all aspects of the film. He was one of the first of the "new wave" directors of the late 1950s and 60s to make films that were less studio-bound and script-dominated. Truffaut's films are noted for their surface charm, which often masks a highly ironic, even bitter, undercurrent. His films The 400 Blows (1959), Stolen Kisses (1968), Bed and Board (1970), and Love on the Run (1979) comprise a kind of filmed autobiography. Other notable works include Shoot the Piano Player (1960), Jules and Jim (1961), The Wild Child (1971), Day for Night (1973), The Story of Adele H. (1975), and The Last Metro (1978). He occasionally took leading roles in his own films. He acted only once under another director, in Steven Spielberg's Close Encounters of the Third Kind (1977).A hand signed cut signature by Francois Truffaut has been affixed to the title page of the book. The cut portion is approximately 1" X 2 1/2".........BOTH BOOK AND AUTOGRAPH ARE IN VERY GOOD CONDITION. 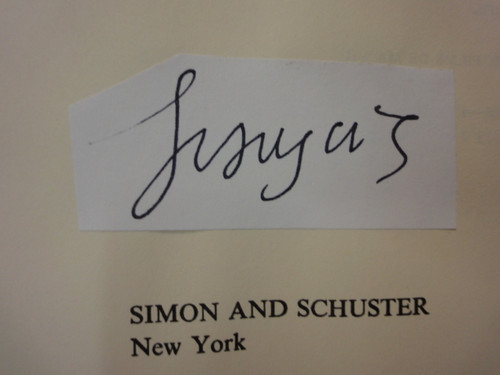 Truffaut, Francois "The Films In My Life" 1975 Book Signed Autograph