THIS IS AN AUTHENTICALLY AUTOGRAPHED PHOTO BY DANIEL J TRAVANTI AND ED ASNER... THIS IS A 8 INCH BY 10 INCH BLACK AND WHITE PHOTO SIGNED BY DANIEL J TRAVANTI AND ED ASNER. CONDITION OF THE PHOTO AND AUTOGRAPHS IS VERY GOOD. Daniel John Travanti (b. March 7, 1940) is an American actor. He is known for his starring role as Frank Furillo in the television drama Hill Street Blues. Travanti, one of five children, was born in Kenosha, Wisconsin, to Italian immigrant parents. His father was a factory worker. During his teen years, Travanti was an athlete and good student, earning scholarships to Harvard University, Princeton University, and Dartmouth College though he eventually attended the University of Wisconsin-Madison.[1] Travanti earned two Emmy Awards for his portrayal of the Hill Street Station Captain Frank Furillo. Since Hill Street Blues, not much has been heard from Travanti with the exception of a few bit parts in television programs such as Poltergeist: The Legacy (1997) and Prison Break (2005). He did co-star in the 1989 cult classic Millennium and as Lt Ray McAuliffe in the 1993 series Missing Persons. In January-March 2007, Travanti appeared off Broadway in Oren Safdie's The Last Word... at the Theatre at St. Clements in New York City and November-December 2008, Travanti played the leading role of Con Melody in an off-off Broadway production of Eugene O'Neil's, entitled "A Touch of the Poet" for Friendly Fire Theatre in New York City. Travanti did a complete career interview with the Archive of American Television that can be viewed on You Tube. Edward Asner (born November 15, 1929) is an American actor primarily known for his Emmy-winning role as Lou Grant on The Mary Tyler Moore Show and its spin-off series, Lou Grant. He also appeared as a recurring guest star as Wilson White on the television series Studio 60 on the Sunset Strip. 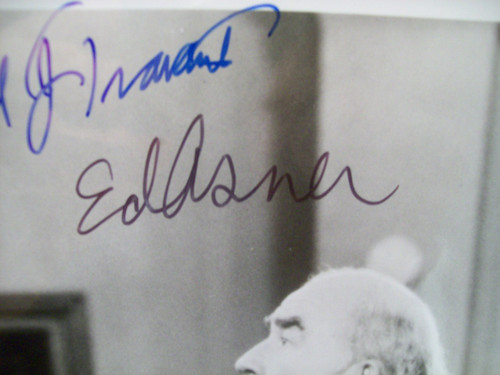