Pamela Lyndon Travers OBE (born Helen Lyndon Goff; 9 August 1899 – 23 April 1996) was an Australian-British writer who spent most of her career in England. She is best known for the Mary Poppins series of books, which feature the eponymous magical nanny. Goff was born in Maryborough, Queensland, and grew up in the Australian bush before being sent to boarding school in Sydney. Her writing was first published when she was a teenager, and she also worked briefly as a professional Shakespearean actress. Upon emigrating to England at the age of 25, she took the name "Pamela Lyndon Travers" and adopted the pen name "P. L. Travers" in 1933 while writing the first of eight Mary Poppins books.Travers travelled to New York City during World War II while working for the British Ministry of Information. At that time, Walt Disney contacted her about selling to Walt Disney Productions the rights for a film adaptation of Mary Poppins. After years of contact, which included visits to Travers at her home in London, Walt Disney did obtain the rights and the Mary Poppins film premiered in 1964. In 2004, a stage musical adaptation of the books and the film opened in the West End; it premiered on Broadway in 2006. A film based on Disney's efforts to persuade Travers to sell him the Mary Poppins film rights was released in 2013, Saving Mr. Banks, in which Travers is portrayed by Emma Thompson. In a 2018 sequel to the original film, Mary Poppins Returns, Poppins, played by Emily Blunt, returns to help the Banks family once again. The book has been autographed on the title page by P. L. Travers................BOTH BOOK AND AUTOGRAPH ARE IN EXCELLENT CONDITION. 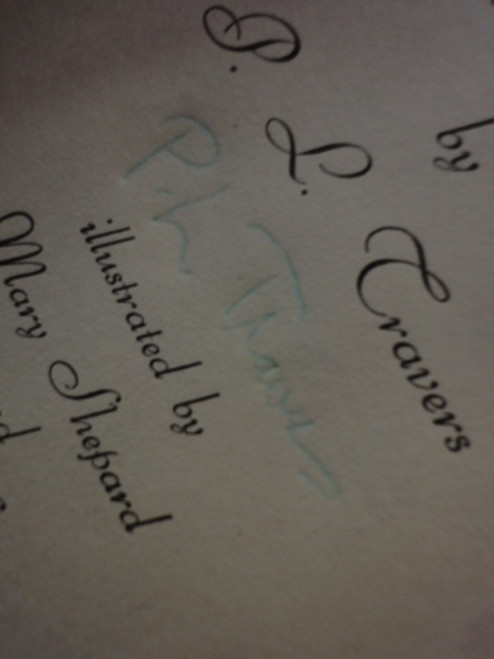