This item is a 9" X 13",black and white lithograph photo of Iva Toguri-better known as "Tokyo Rose". The photo has been mounted on a 9" X 13" piece of photography paper.D'Aquino, Iva Toguri, 19162006, American citizen of Japanese descent, best-known of some dozen women who, during World War II, made English propaganda broadcasts to American troops on Radio Tokyo; b. Los Angeles as Iva Ikuko Togura. Seductive-voiced, playing popular American tunes, and attempting to demoralize the troops, the women were collectively nicknamed Tokyo Rose by their American listeners. The daughter of Japanese immigrants, she was visiting an aunt in Tokyo and stranded there after the attack on Pearl Harbor (1941), and from 1943 to 1945 she worked as a radio announcer. After the end of the war, she was arrested, but was released from U.S. custody without being charged in 1946. Her case was reopened in 1948, and she was tried and convicted of treason in 1949, becoming the only woman convicted of treason in the United States. After serving six years in prison she was released on parole. D'Aquino denied any disloyalty during her trial, and no evidence was presented of any treasonous broadcast; critical testimony against her was later shown to be false and coerced. She was pardoned by President Gerald Ford in 1977.The photo has been autographed on the front by Iva Toguri. The autograph reads-"Thanks,you are very kind-Iva T".................BOTH PHOTO AND AUTOGRAPH ARE IN VERY GOOD CONDITION...................... 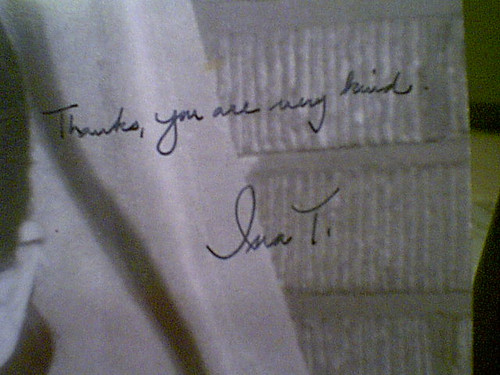