THIS IS AN AUTHENTICALLY AUTOGRAPHED LP BY RICHARD TODD AND PETER FINCH... WALT DISNEY PRESENTS THE STORY OF ROBIN HOOD-FROM THE ORIGINAL MOTION PICTURE SOUNDTRACK(DISNEYLAND DQ 1249)BACK PHOTO COVER IS SIGNED BY RICHARD TODD AND PETER FINCH. CONDITION OF THE VINYL,COVER, AND AUTOGRAPH IS VG. The Story of Robin Hood and His Merrie Men is a live action Disney version of the Robin Hood story. It was released in 1952. It was written by Lawrence Edward Watkin and directed by Ken Annakin. It stars: * Richard Todd as Robin Hood, * Joan Rice as Maid Marian, * Peter Finch as the Sheriff of Nottingham, * James Hayter as Friar Tuck, * James Robertson Justice as Little John, * Martita Hunt as Queen Eleanor of Aquitaine, * Hubert Gregg as Prince John, * Elton Hayes as Allan-a-Dale, * Anthony Eustrel as the Archbishop of Canterbury, * Patrick Barr as King Richard I and * Anthony Forwood as Will Scarlet. 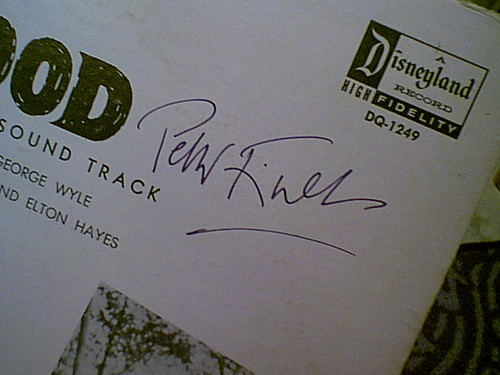