THIS IS AN AUTHENTICALLY AUTOGRAPHED LP BY MICHAEL TODD JR... MICHAEL TODD JR IS PLEASED TO PRESENT-MIKE TODD'S BROADWAY-A MUSICAL CAVALCADE OF HIS HIT SHOWS-MUSICAL DIRECTOR JACK SAUNDERS-(EVEREST STEREO SDBR 1011)LP IS BOX SET WITH DIE CUT COVER-LP HAS ORIGINAL PHOTOS AND GATEFOLD COVER. PHOTO COVER IS SIGNED BY MICHAEL TODD JR. CONDITION OF THE VINYL,COVER, AND AUTOGRAPH IS VG. Todd began his career in the construction business, where he made, and subsequently lost, a fortune. He later served as a contractor to Hollywood studios, and during the 1933-1934 Century of Progress Exposition he produced the attraction called "the Flame Dance." (In this spectacular number, gas jets were designed to burn part of a dancer's costume off, leaving her naked in appearance.) Later, he formed a company and toured with a production of the Gilbert and Sullivan operetta The Mikado, his high school favorite. When this tour closed, he revamped the show as the jazzier The Hot Mikado, which ran at the 1939 New York World's Fair. Todd went on to produce 30 Broadway shows during his career. Todd's business career was volatile, and failed ventures left him bankrupt many times. In 1952, Todd produced an extravagant production of the Johann Strauss II operetta, "A Night In Venice," complete with floating gondolas at the newly constructed Jones Beach Theatre in Long Island, New York. It ran for two seasons. In 1950, Mike Todd formed The Cinerama Company with the broadcaster Lowell Thomas and the inventor Fred Waller. The company was created to exploit Cinerama, a film process created by Waller that used three film projectors to create a giant composite image on a curved screen. The first Cinerama feature was This is Cinerama, which was released in September 1952. Soon after its release, Todd left the Cinerama Company to develop a new widescreen process which would eliminate some of Cinerama's flaws. The result was the Todd-AO process, designed by the American Optical Company. The process was first used commercially for the successful 1955 film adaptation of Oklahoma!. Todd later produced the film for which he is most famous, Michael Todd's Around the World in 80 Days, which debuted in cinemas on October 17, 1956. Costing only $6 million to produce, the movie earned $16 million at the box office. In 1957, "Around the World in 80 Days" won the Best Picture Academy Award. 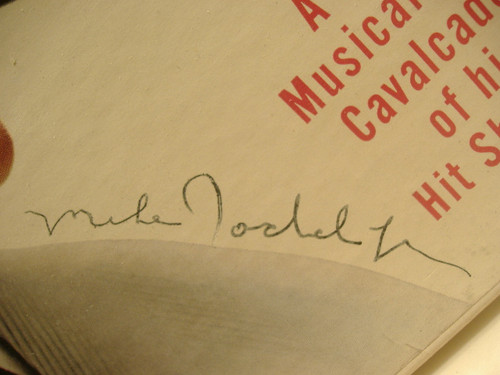