Tommy Dorsey-"You And I"-Meredith Wilson-sheet music. This 1941 song was the theme song of "Maxwell House Coffee-Time" and Tommy Dorsey is featured on the front cover.Though he might have been ranked second at any given moment to Benny Goodman, Artie Shaw, Glenn Miller, or Harry James, Tommy Dorsey was overall the most popular bandleader of the swing era that lasted from 1935 to 1945. His remarkably melodic trombone playing was the signature sound of his orchestra, but he successfully straddled the hot and sweet styles of swing with a mix of ballads and novelty songs. He provided showcases to vocalists like Frank Sinatra, Dick Haymes, and Jo Stafford, and he employed inventive arrangers such as Sy Oliver and Bill Finegan. He was the biggest-selling artist in the history of RCA Victor Records, one of the major labels, until the arrival of Elvis Presley, who was first given national exposure on the 1950s television show he hosted with his brother Jimmy.The sheet music has been autographed on the front cover by Tommy Dorsey in blue fountain pen........BOTH SHEET MUSIC AND AUTOGRAPH ARE IN NICE CONDITION........... 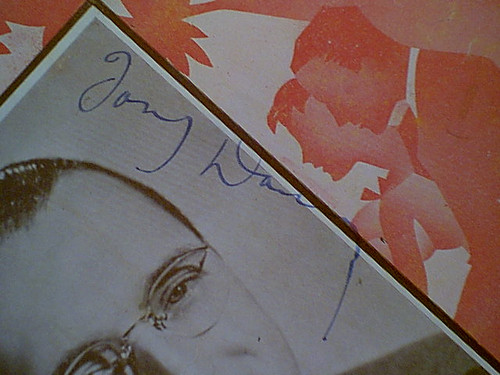