"Under Your Spell"-1936-Movietone-sheet music.Otto Preminger was able to make his directorial debut on Under Your Spell solely because Darryl Zanuck couldn't care less about the film's quality; it was a contractual obligation film for Lawrence Tibbett. In Spell, Tibbett plays Anthony Allen, a world famous singer who has grown tired of the trials that come with celebrity. Seeking to avoid the spotlight, ceaseless publicity and determined fans, Allen enlists the aid of his butler in secretly escaping to a ranch in Mexico. Allen's manager (Gregory Ratoff) is understandably upset with his client's behavior and so sets in motion a scheme of his own. He contacts celebrity-hunting heiress Cynthia Drexel (Wendy Barrie) and lets her know where to find the reluctant star. Drexel quickly hunts down her prey and sticks to him like glue. Although Allen initially is exasperated with her, he soon finds himself attracted to her. In addition to arias from The Marriage of Figaro and Faust, Tibbert performs Arthur Schwartz and Howard Dietz's "Amigo," "My Little Mule Wagon" and the title song. The sheet music has been autographed on the front cover by Lawrence Tibbett with a fountain pen in blue. The sheet music has also been autographed on the front cover by H. McHornos who was Lawrence Tibbett's publicist for the duration of the film.........BOTH SHEET JMUSIC AND AUTOGRAPHS ARE IN VERY GOOD CONDITION.......... 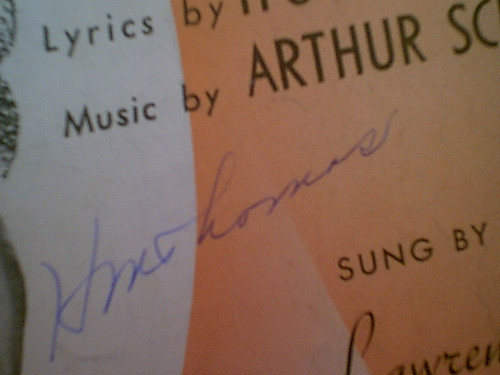