This item is a 10" X 13",color lithograph photo of Cheryl Tiegs.Cheryl Tiegs was perhaps the most famous American model of the 1970s. A blue-eyed honey blonde with sporty good looks, she debuted on the cover of Glamour at age 17, and later appeared on the covers of major magazines from Cosmopolitan to Time. She also became a staple of the annual Sports Illustrated swimsuit issue, causing a ruckus in 1978 when she appeared in revealing fishnet bathing suit. Soon after, a poster of Tiegs in a pink bikini became nearly as popular as the similar cheesecake poster of Farrah Fawcett. She also was a prominent spokesmodel for Cover Girl makeup. Tiegs continued to model in her 40s and 50s and developed her own signature line of wigs for Revlon. Tiegs appeared on the cover of Sports Illustrated in 1970, 1975 and 1983... Tiegs and her fourth husband, Rod Stryker, had twins by a surrogate mother in July of 2000, when Tiegs was 52; the boys were named Jaden and Theo. Stryker filed for divorce in 2001... Tiegs has another son, Zach, from an earlier marriage to Tony Peck, son of actor Gregory Peck.The color lithograph photo has been autographed on the front by Cheryl Tiegs..............BOTH PHOTO AND AUTOGRAPH ARE IN VERY GOOD CONDITION. 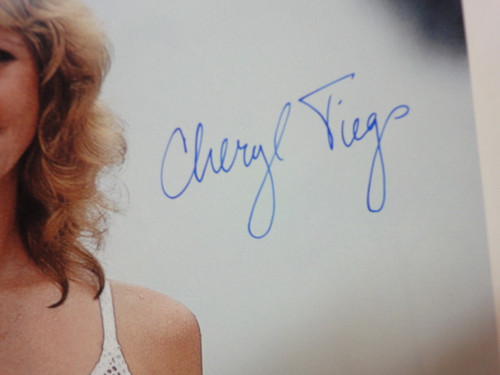