Terry Thomas & Roger Livesay(Caedmon TC 1137)-"Jeeves By P. G. Wodehouse"-LP. Thomas Terry Hoar-Stevens (14 July 1911  8 January 1990) was a distinctive English comic actor, known as Terry-Thomas. He was famous for his portrayal of disreputable members of the upper classes, especially cads, the trademark gap in his front teeth, cigarette holder, dressing gown, and such catch-phrases as "What an absolute shower!" and "Good show!"The LP has been autographed on the front cover by Terry Thomas...........CONDITION OF VINYL,COVER AND AUTOGRAPH IS VG PLUS.RECORD IS IN ORIGINAL CAEDMON INNER SLEEVE.............. 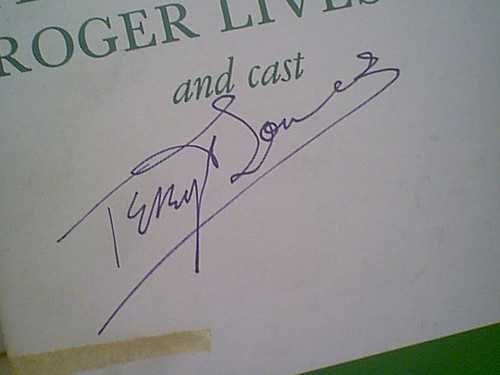