This item is a 12" X 16" over sized black and white photo of The Three Stooges-Moe Howard Larry Fine Shemp Howard in a scene from the 1953 film-"Spooks".Spooks! is a 1953 short film directed by Jules White and starring American slapstick comedy team The Three Stooges (Moe Howard, Larry Fine and Shemp Howard). It is the 148th short film released by Columbia Pictures starring the comedians, who released 190 short films for the studio between 1934 and 1959......The Three Stooges were an American vaudeville and comedy team active from 1922 until 1970, best known for their 190 short subject films by Columbia Pictures that have been regularly airing on television since 1958. Their hallmark was physical farce and slapstick. Six stooges appeared over the act's run (with only three active at any given time): Moe Howard and Larry Fine were mainstays throughout the ensemble's nearly fifty-year run and the pivotal "third Stooge" was played by (in order of appearance) Shemp Howard, Curly Howard, Shemp Howard again, Joe Besser, and Curly Joe DeRita. A hand signed cut signature by Moe Howard with a fountain pen in black,Larry fine with a fountain pen in blue and Shemp Howard with a fountain pen in black has been affixed to the front of the photo. The cut signature portions are approximately 1" X 2"............BOTH PHOTO AND AUTOGRAPHS ARE IN VERY GOOD CONDITION. 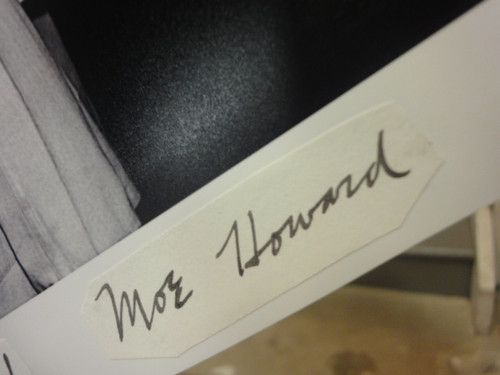