Dylan Thomas-"Selected Writings Of"-1946-New Directions-5" X 8"-183 pages-Hard Cover Book-With Illustration-Signed By Author. Dylan Marlais Thomas (27 October 1914 – 9 November 1953) was a Welsh poet and writer whose works include the poems "Do not go gentle into that good night" and "And death shall have no dominion"; the "play for voices" Under Milk Wood; and stories and radio broadcasts such as A Child's Christmas in Wales and Portrait of the Artist as a Young Dog. He became widely popular in his lifetime and remained so after his death at the age of 39 in New York City. By then he had acquired a reputation, which he had encouraged, as a "roistering, drunken and doomed poet. The book has been autographed on the title page by Dylan Thomas..................BOTH BOOK AND AUTOGRAPH ARE IN EXCELLENT CONDITION. 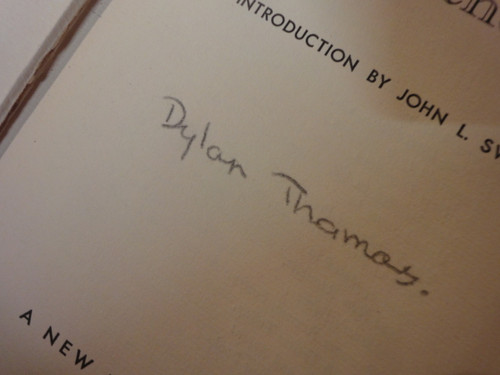