This item is an 8" X 10",black and white publicity photo of actor William Thomas Jr.William Thomas, Jr. (born November 1947 in Columbus, Ohio) is an African American actor. He is known for his recurring role as Vanessa Huxtable's fiancé Dabnis Brickey on the long-running NBC sitcom The Cosby Show. He portrayed the character from 1991 to 1992, during the series' eighth and final season.Prior to his work on The Cosby Show, Thomas portrayed Cool Charles on the critically acclaimed but short-lived 1987-1988 CBS comedy-drama Frank's Place which starred Tim Reid and his wife Daphne Maxwell Reid. He also portrayed Det. William Donald Potts on Steven Bochco's widely-panned 1990 ABC musical-drama Cop Rock.The photo has been autographed on the front by William Thomas Jr................BOTH PHOTO AND AUTOGRAPH ARE IN VERY GOOD CONDITION. 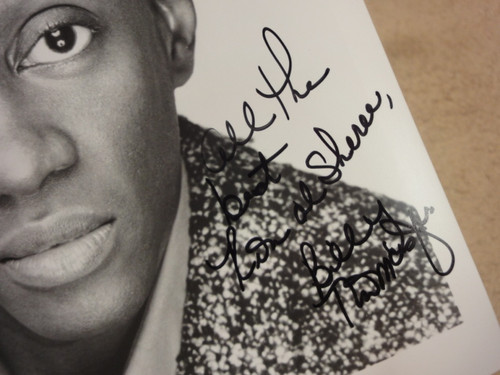