THIS IS AN AUTHENTICALLY AUTOGRAPHED LP BY CLAUDE THORNHILL.. CLAUDE THORNHILL AND HIS ORCHESTRA(TREND TL 1001)DREAM STUFF! 10 INCH LP-BACK PHOTO COVER IS SIGNED BY CLAUDE THORNHILL-TRACKS: SUMMER IS GONE, WHEN I'M WITH YOU, BY A RIPPLING STREAM, PUTTIN AND TAKIN, YOU GO TO MY HEAD, ADIOS, DEEP PURPLE, TO EACH HIS OWN. CONDITION OF THE VINYL,COVER, AND AUTOGRAPH IS VG. Claude Thornhill (*August 10, 1909 at Terre Haute, Indiana † July 1, 1965, New York City) was an American pianist, arranger and bandleader. As a youth, he was recognized as an extraordinary talent and formed a traveling duo with Danny Polo, a musical prodigy on the clarinet and trumpet from nearby Clinton, Indiana. As a student at Garfield High School in Terre Haute, he played with several theater bands. After playing for Paul Whiteman, Benny Goodman, Ray Noble, and Billie Holiday, and arranging "Loch Lomond" and "Annie Laurie" for Maxine Sullivan, in 1940 he founded his Claude Thornhill Orchestra. Danny Polo was his lead clarinet player. Although the Thornhill band was originally a sophisticated dance band it became known for its many superior jazz musicians and for Thornhill's and Gil Evans' innovative arrangements; its "Portrait of a Guinea Farm" has become a classic jazz recording. The band played without vibrato so that the timbres of the instruments could be better appreciated, and Thornhill encouraged the musicians to develop cool-sounding tones. The band was popular with both musicians and the public; the Miles Davis Nonet was modelled in part on Thornhill's cool sound. The band's most successful records were "Snowfall," "A Sunday Kind of Love," and "Love for Love." The band ceased operation in 1942 when Thornhill entered the military, where he performed with Artie Shaw's United States Navy band, then was revived from 1946 to 1948 in New York and until 1953 on the road. In the mid 1950s Thornhill became Tony Bennett's musical director briefly, then toured with small groups. He offered his big band library to Gerry Mulligan when Gerry formed the Concert Jazz Band, but Gerry regretfully declined the gift, since his instrumentation was different. A large portion of his extensive library of music is currently held by Drury University in Springfield, Missouri. 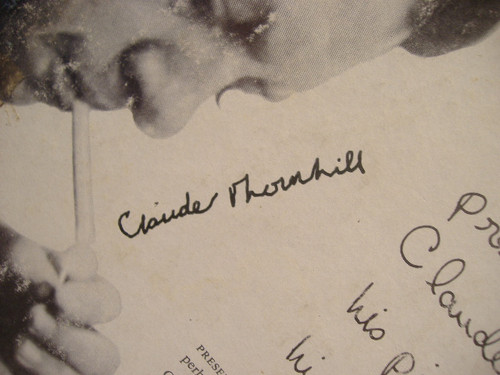