The Temptations-"It's You That I Need"-1967-Jobete-Sheet Music. This sheet music originally sold for ninety five cents. The Temptations are an American vocal group from Detroit, Michigan, who released a series of successful singles and albums with Motown Records during the 1960s and 1970s. The group's work with producer Norman Whitfield, beginning with the Top 10 hit single "Cloud Nine" in October 1968, pioneered psychedelic soul, and was significant in the evolution of R&B and soul music. The band members are known for their choreography, distinct harmonies, and dress style. Having sold tens of millions of albums, the Temptations are among the most successful groups in popular music........David Eli Ruffin (born Davis Eli Ruffin, January 18, 1941 – June 1, 1991) was an American soul singer and musician most famous for his work as one of the lead singers of the Temptations (1964–68) during the group's "Classic Five" period as it was later known. He was the lead voice on such famous songs as "My Girl" and "Ain't Too Proud to Beg."Known for his unique raspy and anguished tenor vocals, Ruffin was ranked as one of the 100 Greatest Singers of All Time by Rolling Stone magazine in 2008. He was inducted into the Rock and Roll Hall of Fame in 1989 for his work with the Temptations. Fellow Motown recording artist Marvin Gaye once said admiringly of Ruffin that, "I heard [in his voice] a strength my own voice lacked."The sheet music has been autographed on the front cover by David Ruffin Melvin Franklin Otis William Eddie Kendricks Paul Williams..........BOTH SHEET  MUSIC AND AUTOGRAPHS ARE IN EXCELLENT CONDITION. 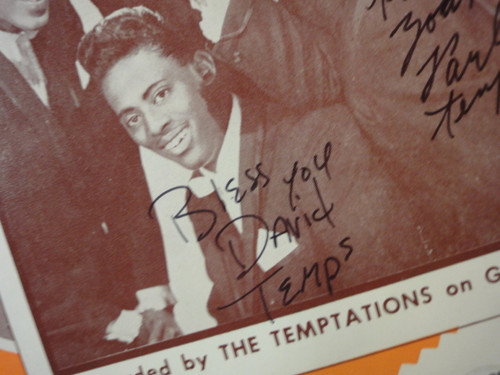