This item is a 9" X 12",black and white lithograph photo of actor Robert Taylor in a scene from one of his famous movies. The lithograph photo has been mounted on a 9" X 12" piece of construction paper.Robert Taylor's cumbersome given name, Spangler Arlington Brugh, can be blamed on his father, a Nebraska doctor. As a high schooler, Taylor participated on the track team, won oratory awards, and played the cello (his first love) in the school band. Attending Pomona College to study music, Taylor became involved in student theatricals, where his uncommonly good looks assured him leading roles. Spotted by an MGM talent scout, the 23-year-old Taylor was signed to a contract with that studio  though his first film, Handy Andy (1934), would be a loanout to Fox. Taylor was given an extended, publicly distributed "screen test" when he starred in the MGM "Crime Does Not Pay" short, playing a handsome gangster who tries to avoid arrest by purposely disfiguring his face with acid. It was another loanout, to Universal for Magnificent Obsession (1935), that truly put Taylor in the matinee-idol category. Too "pretty" to be taken seriously by the critics, Taylor had to endure some humiliating reviews during his first years in films; even when delivering a perfectly acceptable performance as Armand in Camille (1936), Taylor was damned with faint praise, reviewers commenting on how "surprised" they were that he could act. Nobody liked Taylor but his public and his coworkers, who were impressed by his cooperation and his willingness to give 110 percent of himself and his time on the set. Though never a great actor, Taylor was capable of being a very good one, as even a casual glance at Johnny Eager (1942) and Bataan (1942) will confirm. Taylor's contributions to the war effort included service as an Air Force flight instructor and his narration of the 1944 documentary The Fighting Lady. His film career in eclipse during the 1950s, Taylor starred for three years in the popular weekly police series Robert Taylor's Detectives (1959-1962); and when his friend, Ronald Reagan, opted for a full-time political career in 1965, Taylor succeeded Reagan as host/narrator of the Western anthology Death Valley Days. Robert Taylor was married twice, to actresses Barbara Stanwyck (they remained good friends long after the divorce) and Ursula Theiss. The lithograph has been autographed on the front by Robert Taylor with a fountain pen in blue............BOTH LITHOGRAPH PHOTO AND AUTOGRAPH ARE IN VERY GOOD CONDITION............. 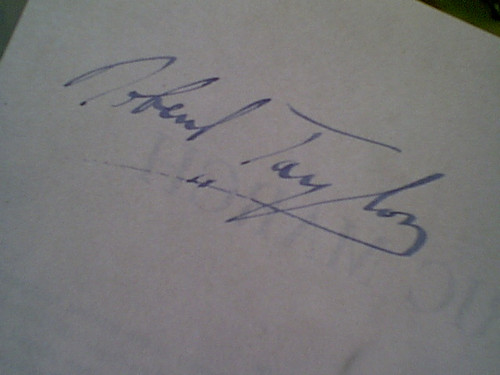