Music From The Soundtrack(MGM 103-ten inch)-"Quo Vadis"-Ten Inch LP. This ten inch LP features the 1951 Movie-"Quo Vadis". The movie stars Robert Taylor,Deborah Kerr and Peter Ustinov.Originally advertised as "Colossal Quo Vadis," this opulent MGM production is far and away the most elaborate of the many versions of Henryk Sienkiewicz' novel. The plot, as always, concerns the romance between a beautiful early Christian woman (Deborah Kerr) and the initially agnostic Roman soldier Marcus Vinicius (Robert Taylor). This love story is laid against the larger intrigues of the debauched emperor Nero (Peter Ustinov), who hopes to gain immortality by destroying Rome with a fire and remaking it in his own image. Part of Nero's master plan is the elimination of the Christian "threat," leading to the climactic lion picnics in the arena. In spite of the many more celebrated highlights (the burning of Rome, the rescue of Lygia [Deborah Kerr] from a rampaging bear, the upside-down crucifixion of Simon Peter), the scene that remains most vivid in the memory is the posthumous "final insult" delivered to Nero by his contemptuous former aide Petronius (Leo Genn). Reportedly, Sophia Loren can be spotted as an extra during the Quo Vadis? crowd scenes. The ten inch LP has been autographed on the front cover by Robert Taylor and Peter Ustinov in black fountain pen and Deborah Kerr in blue fountain pen............CONDITION OF VINYL,COVER AND AUTOGRAPHS IS VG..... 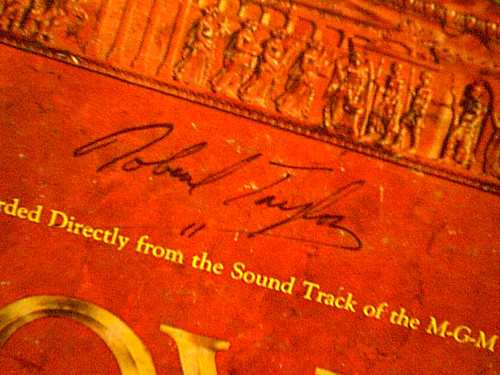