This item is a 3" X 3 1/2",black and white photo of actor Rod Taylor.Just as British-born James Stewart found it necessary to change his name to Stewart Granger upon embarking on an acting career, so too was Australian Robert Taylor compelled to choose another cognomen upon entering show business. He tried Rodney Taylor at first, then shortened it to the more "macho" Rod Taylor. A trained painter, Taylor switched to acting in his early twenties, toting up Australian stage credits before making his first Aussie film, The Stuart Exposition, in 1951. A villainous stint as Israel Hand in the 1954 Australian/U.S. production Long John Silver gave evidence that Taylor might be able to handle leading roles. However, he was still among the supporting ranks in his first American film, The Virgin Queen (1955). Signed to a nonexclusive contract by MGM in 1957, Taylor was cast in predominantly American roles, and accordingly managed to submerge his Australian accent in favor of a neutral "mid-Atlantic" cadence; even when playing an Englishman in 1960's The Time Machine, he spoke with barely a trace of a discernable accent. His film career peaked in the early to mid 1960s; during the same period he starred in the TV series Hong Kong (1961), the first of several weekly television stints (other series included Bearcats, The Oregon Trail, Masquerade and Outlaws). He was so long associated with Hollywood that, upon returning to Australia to appear in the 1977 film The Picture Show Man, Taylor was cast as an American. Gaining a bit of avoirdupois in recent years, Rod Taylor has retained his rugged, robust features and has thrived in character roles as ageing, but still virile, outdoorsmen.The photo has been autographed on the front by Rod Taylor........BOTH PHOTO AND AUTOGRAPH ARE IN EXCELLENT CONDITION......... 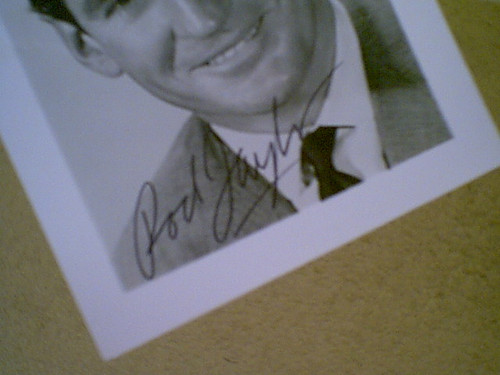