This item is an 8" X 10",black and white photo of Robert Taylor in the 1941 Movie-"Billy The Kid".Billy the Kid is a 1941 American color remake of the 1930 film of the same name. The film features Robert Taylor as Billy and Brian Donlevy as a fictionalized version of Pat Garrett renamed "Jim Sherwood" in the film. Directed by David Miller and based on the book by Walter Noble Burns, the cast also included Gene Lockhart and Lon Chaney, Jr.. The film was not as well received as the 1930 original, Billy the Kid, which had starred Johnny Mack Brown and Wallace Beery and been shot in an experimental widescreen process. The photo has been autographed on the front by Robert Taylor with a fountain pen in brown.............BOTH PHOTO AND AUTOGRAPH ARE IN VERY GOOD CONDITION................... 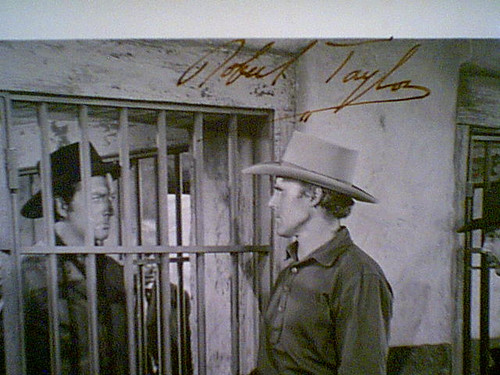