"You Are My Lucky Star"-1935-Franci Day & Hunter-Berlin-10 X 13"-sheet music. This vintage oversized sheet music is an import from Germany with lyrics printed in both English and German.The Broadway Melody of 1936 was designed as the first of many annual follow-ups to "MGM"'s early-talkie triumph Broadway Melody (1929). Jack Benny is atypically cast as a Walter Winchell type who carries on a feud with Broadway producer Robert Taylor. Into this fray comes Taylor's childhood sweetheart Eleanor Powell, who wants to play a role in Taylor's upcoming production. Already under fire from Benny for exhibiting favoritism, Taylor says no. Powell gets into the show anyway, disguising herself as a celebrated Parisian stage star. The film's song highlights (one of them sung by Robert Taylor!) include "I've Got a Feeling You're Fooling", "Broadway Rhythm", and a holdover from the original Broadway Melody, "You Are My Lucky Star." Spotlighted in several numbers is the song 'n' dance team of Buddy and Vilma Ebsen.The sheet music has been autographed on the front by Robert Taylor with a fountain pen in black and Eleanor Powell with a fountain pen in brown.............BOTH SHEET MUSIC AND AUTOGRAPHS ARE IN VERY GOOD CONDITION. 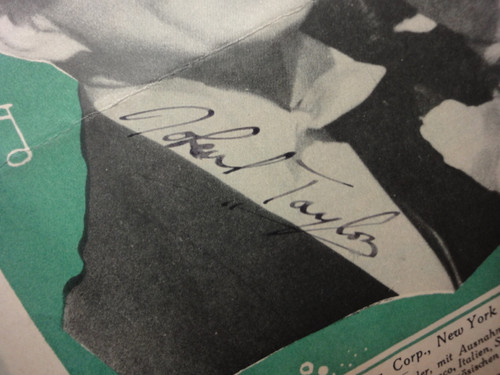