Hit Parader Magazine-Sept. 1971-66 pages. This vintage Hit Parader Magazine-which originally sold for fifty cents-features a color cover photo of musician James Taylor plus an article with photos.James Taylor was a big part of the folk revolution of the 1960s and early 1970s, recording hits like 'Carolina in My Mind,' 'Sweet Baby James,' and Carole King's 'You've Got A Friend.' Taylor was married for a time to singer Carly Simon, and their passionate relationship and breakup was much publicized. Also much publicized were Taylor's struggles with depression and heroin addiction. Taylor continued to tour and record throughout the 1980s and 1990s, emerging as a kind of elder statesman of pop music.The magazine has been autographed on the front cover by James Taylor.....BOTH MAGAZINE AND AUTOGRAPH ARE IN VERY GOOD CONDITION. 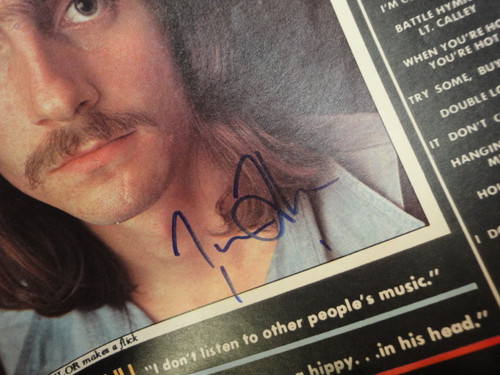