Screen Stars Magazine-May 1956-82 pages. This vintage Screen Stars Magazine-which originally sold for twenty five cents-features a color cover photo of Elizabeth Taylor plus and article with photos.One of the great Hollywood stars of the 20th century, Elizabeth Taylor has had three fairly distinct career personas: as the winsome child star of movies like National Velvet (1944); as a fiery prima donna, the acknowledged "world's most beautiful woman" and star of movies like Cat on a Hot Tin Roof (1958) and Butterfield 8 (1960); and as an older Hollywood grande dame, tabloid favorite, and friend to pop stars like Elton John and Michael Jackson. Her tempestuous marriage to Welsh actor Richard Burton made them Hollywood's reigning couple in the 1960s: they starred together as lovers in Cleopatra (1963, with Taylor as Cleopatra and Burton as Marc Antony) and then played battling spouses in the 1966 film Who's Afraid of Virginia Woolf? Taylor had seven husbands and eight marriages in all: hotelier Nicky Hilton (1950-51, divorced), actor Michael Wilding (1952-57, divorced), producer Mike Todd (1957 until his 1958 death in a plane crash), singer Eddie Fisher (1959-64, divorced), actor Richard Burton (1964-74, divorced), Burton again (1975-76, divorced again), politician John Warner (1976-82, divorced), and construction worker Larry Fortensky (1991-96, divorced). Taylor won best actress Oscars for Butterfield 8 and Who's Afraid of Virginia Woolf. She was made a Dame Commander of the British Empire (DBE) in 2000 by Queen Elizabeth II.The Screen Stars Magazine has been autographed on the front cover by Elizabeth Taylor with a fountain pen in blue.........BOTH MAGAZINE AND AUTOGRAPH ARE IN AVERAGE CONDITION.................. 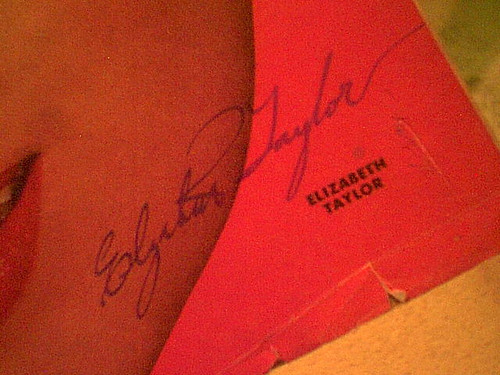