Leo Szilard (born Leó Spitz; February 11, 1898 – May 30, 1964) was a Hungarian-American physicist and inventor. He conceived the nuclear chain reaction in 1933, patented the idea of a nuclear fission reactor in 1934, and in late 1939 wrote the letter for Albert Einstein's signature that resulted in the Manhattan Project that built the atomic bomb. According to György Marx he was one of the Hungarian scientists known as The Martians.Szilard initially attended Palatine Joseph Technical University in Budapest, but his engineering studies were interrupted by service in the Austro-Hungarian Army during World War I. He left Hungary for Germany in 1919, enrolling at Technische Hochschule (Institute of Technology) in Berlin-Charlottenburg, but became bored with engineering and transferred to Friedrich Wilhelm University, where he studied physics. He wrote his doctoral thesis on Maxwell's demon, a long-standing puzzle in the philosophy of thermal and statistical physics. Szilard was the first to recognize the connection between thermodynamics and information theory. The magazine has been autographed on the front cover by Leo Szilard...................BOTH MAGAZINE AND AUTOGRAPH ARE IN EXCELLENT CONDITION. 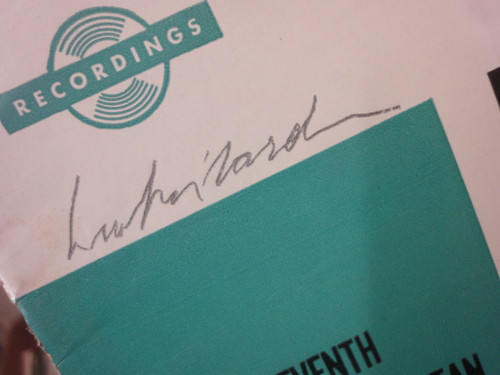