This item is a 12" X 12",color lithograph photo of Helen Suzman.Helen Suzman, DBE (November 7, 1917  January 1, 2009) was a South African anti-apartheid activist and politician.Suzman was noted for her strong public criticism of the governing National Party's policies of apartheid at a time when this was atypical of white South Africans, and found herself even more of an outsider because she was an English-speaking Jewish woman in a parliament dominated by Calvinist Afrikaner men. She was once accused by a minister of asking questions in parliament that embarrassed South Africa, to which she replied: "It is not my questions that embarrass South Africa; it is your answers".Later, as parliamentary white opposition to apartheid grew, the Progressive Party merged with Harry Schwarz's Reform Party and became the Progressive Reform Party. It was renamed the Progressive Federal Party, and Suzman was joined in parliament by notable liberal colleagues such as Colin Eglin. She spent a total of 36 years in parliament. The photo has been autographed on the front by Helen Suzman............BOTH PHOTO AND AUTOGRAPH ARE IN VERY GOOD CONDITION. 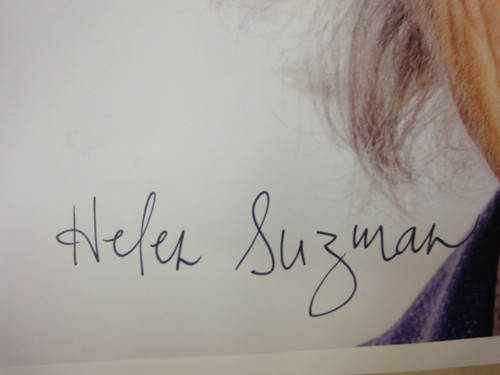