THIS IS AN AUTHENTICALLY AUTOGRAPHED PHOTO BY DONALD SUTHERLAND AND SUZANNE SOMERS... THIS IS A 8 INCH BY 10 INCH BLACK AND WHITE PHOTO BY DONALD SUTHERLAND AND SUZANNE SOMERS. CONDITION OF THE PHOTO AND AUTOGRAPHS IS VERY GOOD. Donald McNicol Sutherland, OC (born July 17, 1935) is a Canadian actor with a film career spanning over 50 years.[1] He is currently working in the American television series, Dirty Sexy Money. Sutherland's most notable movie roles included offbeat warriors in such war movies as The Dirty Dozen, in 1967, and M*A*S*H and Kelly's Heroes in 1970, and an overly optimistic health inspector in Invasion of the Body Snatchers in 1978. Suzanne Somers (born October 16, 1946) is an American actress, author, and businesswoman. Best known for her role as the ditzy blonde Chrissy Snow on the ABC sitcom Three's Company, she also had a noted starring role on the sitcom Step by Step as Carol Foster Lambert. She later capitalized on her acting career by also establishing herself as an author of a series of self-help books. She has released two autobiographies, two self-help books, four diet books, a book of poetry entitled "Touch Me", and a book about hormone replacement therapy. She currently features items of her design on the Home Shopping Network. 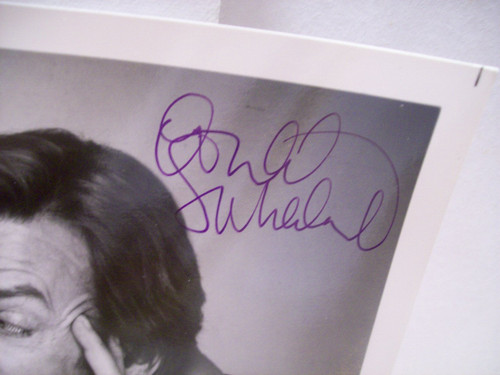