The Supremes(Motown 107)-"Stop In The Name Of Love"/"I'm In Love Again"-45 Record with Picture Sleeve. The quintessential girl group, the Supremes emerged as Motown’s leading female artists after a disappointing start. Best known as a trio, the Supremes started out as the Primettes. Original members included Florence Ballard, Diane (Diana) Ross and Mary Wilson. Ballard left the group in 1968 and was replaced by Cindy Birdsong. Success was slow to come to the Supremes, whose records produced poor results for several years after they signed with Motown. Despite their reputation around Hitsville as the “no-hit” Supremes, Berry Gordy continued to have faith in their appeal and abilities. The Supremes got on track to fame in 1963 with the release of “When the Lovelight Starts Shining Through His Eyes,” produced by Motown’s powerhouse trio, Brian Holland, Lamont Dozier and Eddie Holland. Holland-Dozier-Holland went on to write and produce a string of hits for the group, starting with “Where Did Our Love Go” in 1964. Mega-hits and international stardom followed over the next three years: “Baby Love,” “Come See About Me,” “Stop in the Name of Love” and “You Keep Me Hanging On,” which received the 1966 Grammy for Best Pop Single.The Supremes, now noted for their style, elegance and stellar performances, reached the top of the charts three times in 1966 with “I Hear a Symphony,” “You Can’t Hurry Love” and “You Keep Me Hanging On.” Supremes A’ Go-Go was the first album released by an all-female group to chart at #1 on Billboard’s 200 list. Diana Ross, who had long been the Supremes’ lead singer, was placed center stage in 1967 when the group was renamed “Diana Ross and the Supremes.” She would later embark on a solo singing career in 1970 and be replaced by Jean Terrell. Prior to Ross’ departure, the group hit number-one on American pop charts once more with “Someday We’ll Be Together.” The picture sleeve has been autographed on the front cover by Diana Ross with a fountain pen in blue, Mary Wilson With a fountain pen in brown and Florence Ballard with a fountain pen in green.............CONDITION OF VINYL, COVER AND AUTOGRAPHS IS VG. 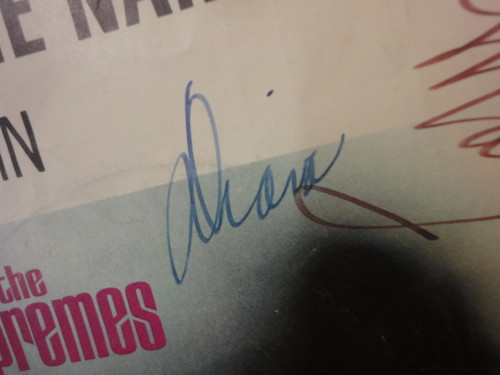