This item is a 3 1/2" X 1 1/2" piece cut from the cover of a Playbill from the 1960's. The Playbill features the Broadway Musical-"Funny Girl" which starred Mimi Hines and Barry Sullivan.Actor Barry Sullivan was a theater usher and department store employee at the time he made his first Broadway appearance in 1936. His "official" film debut was in the 1943 Western Woman of the Town, though in fact Sullivan had previously appeared in a handful of two-reel comedies produced by the Manhattan-based Educational Studios in the late '30s. A bit too raffish to be a standard leading man, Sullivan was better served in tough, aggressive roles, notably the title character in 1947's The Gangster and the boorish Tom Buchanan in the 1949 version of The Great Gatsby. One of his better film assignments of the 1950s was as the Howard Hawks-style movie director in The Bad and the Beautiful (1952). Sullivan continued appearing in movie roles of varying importance until 1978. A frequent visitor to television, Barry Sullivan starred as Sheriff Pat Garrett in the 1960s Western series The Tall Man, and was seen as the hateful patriarch Marcus Hubbard in a 1972 PBS production of Lillian Hellman's Another Part of the Forest. The iterm has been autographed by Barry Sullivan in blue.........BOTH AUTOGRAPH AND PAPER ARE IN NICE CONDITION........ 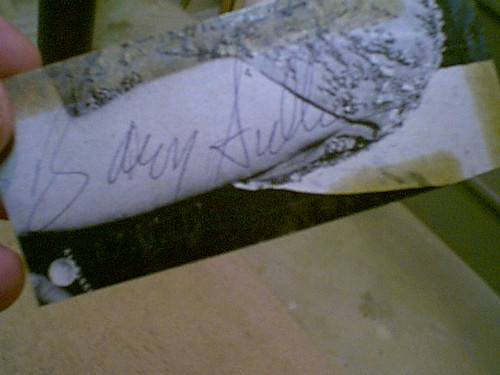