Original Soundtrack-"Star Trek IV The Voyage Home"(MCA 6195)-LP. Tracklist Main Title 2:39 The Whaler 2:00 Market Street 4:39 Crash-whale Fugue 8:15 Ballad Of The Whale 5:03 Gillian Seeks Kirk 2:42 Chekov's Run 1:19 Time Travel 1:29 Hospital Chase 1:13 The Probe 1:17 Home Again: End CreditsStar Trek IV: The Voyage Home is a 1986 American science fiction film released by Paramount Pictures. It is the fourth feature film based on Star Trek, and is a sequel to Star Trek III: The Search for Spock (1984). It completes the story arc begun in Star Trek II: The Wrath of Khan (1982) and continued in The Search for Spock. Intent on returning home to Earth to face trial for their actions in the previous film, the former crew of the USS Enterprise finds the planet in grave danger from an alien probe attempting to contact now-extinct humpback whales. The crew travel to Earth's past to find whales who can answer the probe's call.The LP has been autographed on the back cover by William Shatner Leonard Nimoy George Takei DeForest Kelley...............CONDITION OF VINYL,COVER AND AUTOGRAPHS IS MINT MINUS. 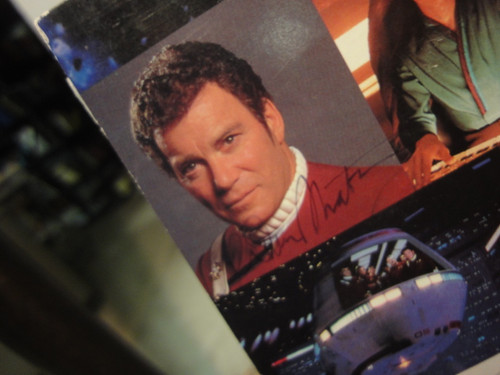