Theodore Sturgeon-"A Touch Of Strange"A Collection Of Stories-5 1/2" X 8"-262 pages-1958-Doubleday & Co-hardcover book with jacket-Signed By Author.Theodore Sturgeon (February 26, 1918  May 8, 1985) was an American science fiction author. He was born Edward Hamilton Waldo in Staten Island, New York; in 1929, after a divorce, his mother married William Sturgeon, and Edward changed his name to Theodore the better to match his nickname, "Ted".Many of Sturgeon's works have a poetic, even an elegiac, quality. He was known to use a technique known as "rhythmic prose", in which his prose text would drop into a standard meter. This has the effect of creating a subtle shift in mood, usually without alerting the reader to its cause. His most famous novel More Than Human (1953) won serious academic recognition, particularly in Europe, where it was seen[attribution needed] as high-quality literature. Sturgeon wrote the screenplays for the Star Trek episodes "Shore Leave" (1966) and "Amok Time" (1967, later published in book form in 1978). The latter is known for his invention of the Pon farr, the Vulcan mating ritual, the first use of the phrase "Live long and prosper" and the first use of the Vulcan hand symbol. Sturgeon also wrote several episodes of Star Trek that were never produced. One of these was notable for having first introduced the Prime Directive. He also wrote an episode of the Saturday morning show Land of the Lost, "The Pylon Express", in 1975. Two of Sturgeon's stories were adapted for The New Twilight Zone. One, "A Saucer of Loneliness", was broadcast in 1986 and was dedicated to his memory. His 1944 novella, "KillDozer", was the inspiration for the 1970s made-for-TV movie, Marvel comic book, and alternative rock band of the same name. The book has beena utographed on the title page by Theodore Sturgeon in blue....................BOTH BOOK AND AUTOGRAPH ARE IN VERY GOOD CONDITION.JACKET HAS WEAR....................... 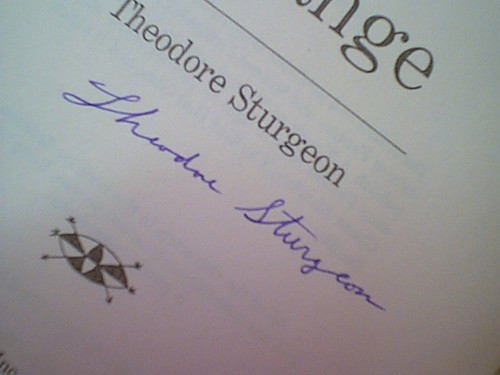