This item is an 8 1/2" X 12",black and white lithograph photo of actor Terence Stamp. The lithograph photo has been mounted on an 8 1/2" X 12" piece of photography paper. Born in Stepney, London on July 22, 1939, Stamp made his film debut in 1962 as the martyred hero in Peter Ustinov's adaptation of Herman Melville's Billy Budd. He turned in a star-making performance that earned him an Oscar nomination and established him as part of a new wave of talent in British cinema. Stamp next made his mark in William Wyler's The Collector (1965), winning a Best Actor award at the Cannes Film Festival for his portrayal of a warped recluse who kidnaps an art student he has lusted after from afar. Stamp spent the rest of the decade earning recognition for both his work and real-life exploits. On the screen, he worked with the likes of John Schlesinger (Far From the Maddening Crowd), Joseph Losey (Modesty Blaise), Ken Loach (Poor Cow), Pier Paolo Pasolini (Teorema), and, for Tre Passi nel Delirio, Federico Fellini, Roger Vadim, and Louis Malle. Off the screen, Stamp was known for his friendships with the likes of Michael Caine and his relationships with such preeminent beauties as Julie Christie and model Jean Shrimpton. He and Christie were immortalized in Ray Davies's song "Waterloo Sunset" in the lines, "Terry and Julie cross over the river, where they feel safe and sound." Despite the promise of his early career, Stamp spent much of the next couple of decades in relative obscurity. He popped up in a number of fairly forgettable films and was cast as a villain in the first two Superman movies. He also appeared in such disparate projects as Legal Eagles (1986), Wall Street (1987), and Young Guns (1988). In 1994, Stamp truly re-entered the filmgoing consciousness, going delightfully against type to play a world-weary transsexual in The Adventures of Priscilla, Queen of the Desert. The film was a surprise success, and Stamp's portrayal was singled out for particular notice. Once one of the cinema's most reliable hard men, Stamp revived his career with a poignent portrayal of a character who wore more make-up than most of the screen's actresses put together.Stamp followed this success with a turn as a mysterious tantric sex therapist in Bliss (1996). In 1999, he could be seen doing supporting work in Bowfinger, in which he had a hilarious turn as a L. Ron Hubbard-esque "guru;" and Star Wars: Episode I-The Phantom Menace. That same year, he starred in Steven Soderbergh's The Limey, back in top form as a grizzled ex-con bent on avenging his daughter's death. One of the film's highlights was the inclusion of footage from the 1968 Poor Cow, which allowed Stamp to appear as a younger version of himself.The photo has been autographed on the front by Terence Stamp...........BOTH PHOTO AND AUTOGRAPH ARE IN VERY GOOD CONDITION.................. 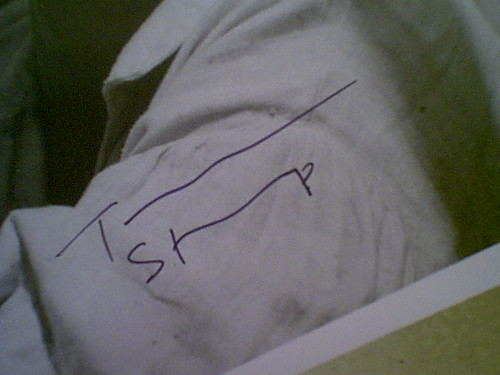