"The Official Rambo III Movie Magazine"-1988-O'Quinn Studios-8" X 11"-65 pages. This movie magazine-which originally sold for $3.95-is devoted entirely to Sylvester Stallone in the 1988 "Rambo III" movie. The magazine features color photos and articles on Sylvester and the movie..............Rambo III is a 1988 American action film directed by Peter MacDonald and co-written by Sylvester Stallone, who also reprises his role as Vietnam War veteran John Rambo. A sequel to Rambo: First Blood Part II (1985), it is the third installment in the Rambo franchise, followed by Rambo. The film depicts fictional events during the Soviet Afghan War. In the film, Rambo sets out on a dangerous journey to Afghanistan in order to rescue his former military commander and his longtime best friend Colonel Trautman from the hands of an extremely powerful and ruthless Soviet Army colonel who is bent on killing both Trautman and Rambo, as he helps lead the Soviet armed forces and their mission to conquer Afghanistan. Rambo III was released worldwide on May 25, 1988, and grossed $189 million at the box office. With a production budget between $58 and $63 million, Rambo III was the most expensive film ever made at the time. The magazine has been autographed on the front cover by Sylvester Stallone..................BOTH MAGAZINE AND AUTOGRAPH ARE IN VERY GOOD CONDITION. 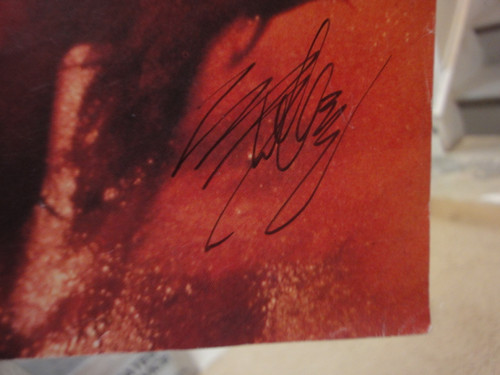