Life Magazine-September 15,1967-144 pages. This vintage Life Magazine-which originally sold for thirty five cents-features a full color cover photo of Josef Stalin's daughter-Svetlana Alliluyeva-"Her extraordinary life within a doomed family ruled by the dictator of a dark era.". The magazine also features a 17 article with photos from her forthcoming book-"Twenty Letters To A Friend".Svetlana Alliluyeva Stalina (born February 28, 1926, Svetlana Iosifovna Dzhugashvili)is the youngest child and only daughter of Soviet Premier Joseph Stalin. A writer and naturalized United States citizen, Alliluyeva caused an international furor by defecting to the United States in 1967.Like most children of high-ranking Soviet officials, Svetlana was raised by a nanny and only occasionally saw her parents. Her mother, Nadezhda Alliluyeva (Stalin's second wife), died on 9 November in 1932, when Svetlana was six. Nadezhda's death was officially ruled as peritonitis resulting from a burst appendix. While there were various other theories as to the cause of her death (murder on the orders of Stalin, or that she was killed by Stalin himself), it now appears the real cause of death was suicide.Svetlana fell in love at the age of 16 with a Jewish filmmaker, Alexei Kapler (of age 40). Her father vehemently disapproved of the romance. Later Kapler was sentenced to ten years in exile in an industrial city of Vorkuta near the Arctic Circle, and it is speculated that the real reason was this romance. At 17, she fell in love with a fellow student at Moscow University, Grigori Morozov, also Jewish. Her father grudgingly allowed the couple to marry, although he made a point of never meeting the bridegroom. After the birth of a son (Joseph) in 1945, the couple divorced in 1947. Svetlana's second husband was a close associate of Stalin's, Yuri Zhdanov (son of his right-hand-man, Andrei Zhdanov). They were married in 1949, and had a daughter, Ekaterina, in 1950, but this marriage also dissolved soon afterward.Though press reports (such as Time Magazine) sometimes claimed that Svetlana was married a third time, in 1951, to Mikhail Kaganovich, the son of Lazar Kaganovich, another primary Stalin associate, Svetlana denies this. In "Only One Year" (p. 382) she says Kaganovich had only one daughter, her friend, and an adopted son who was ten years younger than she. In 1963, while in hospital for the removal of her tonsils, she met an Indian communist visiting Moscow, Brajesh Singh. Singh was mild-mannered and idealistic but gravely ill with bronchiectasis and emphysema. They continued and cemented their relationship while recuperating in Sochi, on the Black Sea. Singh returned to Moscow in 1965, to work as a translator, but they were not allowed to marry. Singh died in 1966 and Svetlana was allowed to travel to India to take his ashes back, for his family to pour them into the Ganges. She stayed in the family home in Kalakankar on the banks of the Ganges for two months and became immersed in local customs. On March 6, 1967, after first having visited the Soviet embassy in New Delhi, Alliluyeva went to the U.S. embassy and formally petitioned Ambassador Chester Bowles for political asylum. This was granted; however, owing to concerns that the Indian government might suffer from possible ill feeling from the Soviet Union, it was arranged for her to leave India immediately for Switzerland, via Rome. She stayed in Switzerland for 6 weeks before proceeding to the United States. The magazine has been autographed on the front cover by Svetlana Alliluyeva in black.....BOTH MAGAZINE AND AUTOGRAPH ARE IN VERY GOOD CONDITION........... 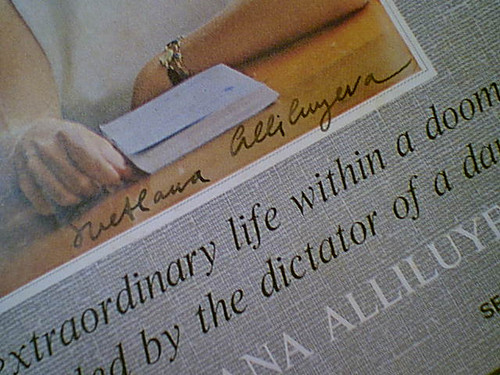